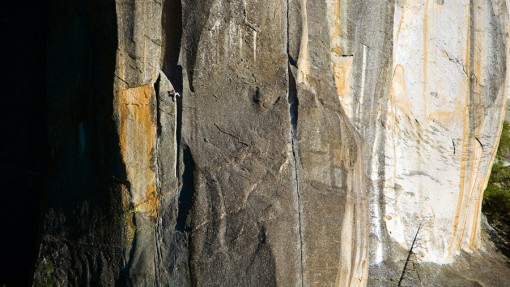 One goal from 2012 was to spend the glorious Rocktober in Yosemite. So when Fall came around I refused to do anything else and managed to get four weekends in a row of time in the Valley. Yet with all this time I lacked a direction for my season. 2011 was focused on climbing Astro-Man and that singular goal allowed me to focus my energy and climb an amazing route. In 2012 it seemed that I was just shopping around. I was unwilling to commit to any new single pitch projects, saving them for potential onsights, and unsure my fitness was adequate to start putting any serious effort into the Phoenix.

Luckily there is an overwhelming number of routes on my “to-do” list and I spent the end of 2012 checking out new places and climbs. The middle of September was my first time back in the Valley when Gordon, a friend from college, visited for a weekend. Despite some warm temps we made the death march up the cathedrals gulley and climbed the Higher Cathedral Spire via the Regular Route. This route was the first of many to offer killer views of Yosemite from slightly more off the beaten path.

I have spent a good number of days, at the Cookie Cliff, staring across at Elephant Rock. It was time to stop waiting to check out Hotline and Fatal Mistake (the white splitter to the right of the climber in the photo above). Fatal Mistake was first up and the most common method is to climb Pink Dream, which is around the corner, and rappel in. I assumed that Pink Dream would be just another forgettable climb but it had super quality cracks!! The two pitches have a variety of jamming and the second pitch is a tricky off-width, sandbagged at 5.10a. I really enjoyed the Pink Dream and Fatal Mistake was excellent as well. Between the two climbs you will do over 100 feet of #3 camalots, so you better be dialed on that size!

For Hotline I partnered up with Jonathan Guy and we swapped leads up yet another splitter route. The cracks on Elephant rock offer high quality jamming and Hotline demands proficiency at off-fingers and thin hands. I was yet again impressed by the route and even though the cruxes spit me off, I will be back for another attempt.

Later in the season during a warm November weekend I managed to climb Hardd and Crack A-Go-Go at the ever popular Cookie Cliff to nearly finish off the cliff’s 5.11 trad routes. It has been fun to get to know the Cookie Cliff and climb many of it’s fabulous routes. There are cracks of all sizes and I also got to try a hidden treasure called Vendetta. This overlooked climb has a phenomenal second pitch which is mostly 5″ hand and fist stacking. The off-width aficionado in our group, Sonia, lead this climb and I happily followed it. I’ll be back to lead this and the most famous off-width at the Cookie, Twilight Zone, in 2013!

The grand finale for the 2012 Fall season was a trip up the first seven pitches of Silent Line on the Gold Wall. This towering route is in the Ribbon Falls amphitheater and grants a spectacular perspective on Yosemite. Steve and I climbed this route in December and were rewarded with t-shirt weather on the south facing wall. The first two pitches are slow with a bolt ladder and some awkward wide free climbing or aiding. The rest of the route follows fun wide hands crack with an exciting tunnel through chimney pitch. The route goes into the sun early and bakes on the typical California day, making it perfect for “winter” ascents.

Hopefully everyone had a great fall. It was great to climb a wide variety of routes and I learned that it helps to set specific goals to help me find direction for the climbing season.