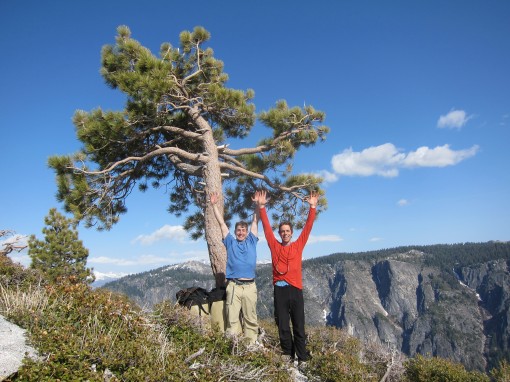 Winter was over and the long days of spring were enticing me to return to Yosemite. The one noticeably absent thing in 2011 was time spent on El Capitan. Stein was going to be in town for business and we decided to go work on Freerider.

The weather was perfect and April seemed to be dry as ever until a storm hit, cloaking Yosemite in fresh snow. To make matters worse the days preceding our climb were filled with rain. It seemed logical to cancel the Freerider plans, but Stein was optimistic that we could still have some fun in Yosemite. I was psyched to climb and we tossed around a multitude of ideas including the Nose. I had assumed that free climbing was more of a priority and didn’t think too much of it. I couldn’t be bothered to hold much of an opinion.

On Tuesday before the weekend Stein and I chatted and he seemed set on the Nose. I was hesitant and nervous but those are the emotions you keep to yourself. I agreed, ready to feed off of Stein’s psyche and motivation. When climbing something big, hard, or intimidating everyone gets a bit nervous. I calmed myself in the packing and organizing, a part of these big climbs that I pride myself in.

Psyched to be climbing EL CAP!

I’d been up the first couple of pitches of the Nose before and so I would lead start leading. I read up on the route to figure out where we would sleep and how much food we would need. Stein had been planning as well and rounded out the necessary gear.

It was great to be climbing with Stein again since it had been over a year since our last foray on El Capitan. We were both climbing fairly well and were very excited for the Nose.

Stein at the base of the Nose

On Friday morning we got up with the sun and packed up all our gear in two haul bags. I’ve found that it’s much better to go with two smaller haul bags than one big one. With more total volume we didn’t have to cram everything into our bags. We set off to the El Cap Bridge with food and water for almost three days . This measured out to 16 liters of water, expecting that we would drink less than 3 liters per person per day on the first and last days.

Hiking to the base, we found the route empty except for another party hauling bags up the first pitch. I made my way up and found a familiar face from the Stanford Alpine club. We chatted while Stein danced his way up the first pitch. Despite the seeping cracks he was in top shape and followed it clean, a good sign for the days to come.

The party was very courteous and allowed us to pass them on Sickle ledge. We were free climbing most of the time and were able to build up a buffer of space. Time is always of the essence so we pulled on gear when the climbing was tricky or hard to figure out. After pitch nine I was in new territory as Stein lead off to Dolt Tower. The weather had turned for the worse and we were happy to have brought extra layers and warm sleeping bags. My hands had almost gone numb following the namesake Stove Legs splitter.

Where are the sunny California skies?

Bundled up but still psyched.

One advantage of reading tips about the route is how little things can make your life much nicer. My hands are about average and I don’t really enjoy wide hand and fist cracks. However with the aid of my leather belay gloves I was able to follow long pitch to Dolt tower. Not only did the gloves make my hands bigger, but the shielded me from both cold and pain!

Our Stanford friends were planning on sleeping at Dolt so we continued to El Cap Tower. The setting sun called for Stein’s lead block to end and I lead the final few pitches by headlamp. The bivy ledge was a perfect width and oh so flat. With a yummy Chipotle burrito in our bellies it was easy to pass out.

Just as twilight started filtering across the valley I was awoken by a shout, “Off Belay”. A NIAD party was upon us. I asked if they needed anything, requested they not drop our rack, which was attached to the anchor, and promptly fell back asleep. Climbing intermingled with my dreams as the team crept away from us. The King Swing took them around the corner and it was time for us to climb again.

Stein gets ready for another thousand feet of crack climbing

Stein started off the leading on the day two and stuck the King Swing on his second try. I tried for the double swing but ended up just yarding across on the haul line. The next pitches were just easy enough for free climbing and Stein made good time up the small crimps and fun cracks. A few helpings of french free got us past the harder moves and before long I was looking up at the Great Roof. Despite going into full aid mode I was having fun.

Luke finishes off the Great Roof

Stein gets ready for the big lower-out on the Great Roof
The “climbing” was still easy and we were making good time. Fatigued and cramping arms got the better of me as I french freed the Pancake flake. The sun was setting as we arrived at Camp V and I was happy to call it a day. The bivy was functional, since there were no other parties, but would be much nicer with a portaledge. Sleep came fast after our another full day of climbing.

The long night of sleep was rejuvenating and I was rearing to go in the morning. The glowering spot when by quickly and we reached Camp VI in no time. The ledge was soaking wet and I was glad we bivyed at the dry Camp V. I donned my rain jacked and aided through a small waterfall to get to the changing corners. The crux was short but I was amazed the pitch was free climbable.

I aided one more wet crack before Stein took back the lead so we could switch into free mode. Despite some intermittent wetness I was happy to be free climbing so high on El Capitan. It was nearly 3000 feet straight down to the base as we pulled over to the final belay. Stein linked the last two pitches, savoring the exposure and awesomeness of the final bolt ladder.

Pulling onto the summit we found the “famous” tree and reveled in our climb. It had been much less epic than we expected. It was only late afternoon and I was still feeling great. It was not only the years of experience that had led us to the top but the luck of doing nothing wrong. Our bags and ropes did not get stuck and we didn’t have any complications due to other parties on the route. A wonderful experience on one of the best routes in Yosemite!

I now understand why the route is so popular. With 5.11 climbing ability you could free all but 300 feet of the route, a shocking percentage! We had a blast and I even found the full on aid pitches to be enjoyable. The aid is mostly C1 with only a few tricky sections. On the first four pitches it really helps to wear free climbing shoes and do free moves while pulling on gear since the good placements can be far apart. Knowing how to clean traverses and do lower-outs is a big plus since the nose wanders around a bunch. I’ll be back!